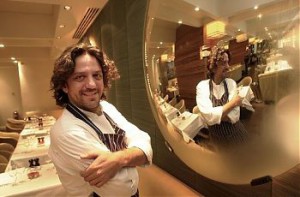 Giorgio Locatelli is late. Forty minutes late. But then it’s to be expected: he is Italian after all. And not Italian in a bland, Spaghetti House, Caffe Nero kind of way, either. The 40-year old TV and restaurant chef is Italian in the way that Graham Norton is gay. He is extraordinarily, superlatively Italian.

He gesticulates wildly. He gets overemotional as he talks about “da family” and the glory of Italian food. He shouts so hard and so often that his voice, today, is threatening to turn into a wheeze. It’s hard to think how he could be any more Italian, unless he broke into a rendition of Shaddap Your Face, or if he swapped his chef whites and striped pinny for an Armani suit.

“Zis table eees fantastic, no?!” he begins, sitting down at Table 11 in his swish West End restaurant, Locanda Locatelli, at 11am. The seats are tucked in a corner of the room between the wine cellar and the noisy kitchen exit. “Anybody who run a restaurant will say zis is a stoopid table!” He raises his arms in a dramatic gesture towards the restaurant, which is decorated with convex mirrors, fabric-coated walls, low lighting and buttery leather. “But zis is where my kids, my wife, my family sit!” Several spots of spittle shoot out of his mouth. “Zis is my living room! Zis is my table! Zis table doesn’t get sold! You gets people who want it, cos they think it brilliant, but they can’t! My family eat here!”

But doesn’t he worry that his two young children, whose mother, Plaxa, is the front-of-house manager at the restaurant, will grow up to be horrendous food snobs if they grow up eating in a restaurant where pasta dishes cost up to £20? Gordon Ramsay has banned his young offspring from his restaurants for precisely that reason. “If Gordon Ramsay says zat, then his food is snobby!” retorts Locatelli, his eyes flashing, his mop of hair flopping over his ashen, bestubbled face. “But my food is truthful – it comes from the pan. I don’t do anything to make it pretty. Yes, of course, I serve truffles for £2,500 a kilo, but it’s not a snobbery thing, it’s just good food.”

This jibe at Ramsay is typical of Locatelli – in that unique Italian way, he has strong opinions and he never shirks from sharing them. Over the course of the next hour, his targets include: supermarkets (“Marks and Spencer executives come here sometimes and I insult them every time!”); TV chefs who promote supermarkets (“You should give viewers the right advice – you shouldn’t be on the payroll of somebody else!”); investors in the restaurant industry (“Those boys in the City – faackkk them! You should never take a penny from these people! They are fackin’ crooks!”); companies that advertise junk food to children (“The people who do zat should be shot! I would do it myself! They are fackin’ poisoning kids!”).

But what annoys him most, it seems, are rude customers. You may remember Locanda Locatelli hitting the headlines last year, when the restaurant reportedly held a couple to ransom when they refused to pay £30 for a truffle starter. But the rumpus over the fungus is nothing compared to what will happen if you are impolite. “The thing is,” reflects the man considered by many to be the finest Italian chef in Britain, “you meet arseholes everywhere. And sometimes you get arseholes in here.

“Y’know, zis is my house. You pay, but you are still a guest, and I demand respect. I had a massive fight with somebody for snapping his fingers. I said: ‘I don’t even call my fackin’ dog like zat.’ He said: ‘I think you are rude.’ I said: ‘You are sitting in my house, snapping your fingers and you think I’m rude? What else do you want? Zat’s my wife, do you want to take her to my bedroom?’ Y’know what I mean? But generally, the people are lovely.”

It’s hard to work out how much this aggression is a part of Locatelli’s natural personality, how much is natural Italian machismo, and how much has to do with the fact that he spends more than 12 hours a day in the aggressive environment of a professional kitchen. And he has spent so long in kitchens that he probably thinks that yelling and screaming and ranting is entirely normal.

He was brought up in his grandparents’ restaurant in Italy, moved to England in 1985 to work at The Savoy, then moved to Paris, before returning to England to become head chef at Olivo, and later establish Zafferano in Knightsbridge.

His period in Paris, where he did six months at Laurent and six at Le Tour d’Argent, was clearly the unhappiest. “I worked 18-hour days and I was treated really badly,” he complains. “Pressure is one thing, bullying is another. They called me just one name – wop! – for a year and a half.” Locatelli experienced great success at Zafferano, earning a Michelin star, but there was evidence of stress here too: he admits to sacking 36 chefs in a month at one point, and it ended badly when he had a falling out with A-Z, the restaurant group that provided a large chunk of financial backing. He says he retains a 25 per cent stake in Zafferano, but it pains him that he had to leave without a cash windfall, despite having spent seven years there. “My heart was as much in zat place as it was in my family, and to be taken away with a letter … pah! But it’s in the past.”

Now that he has done a TV series for the BBC and runs his own successful Michelin-starred restaurant, which counts Tony Blair and Madonna among its guests, he must feel very happy. “Thanks God, thanks God that Locanda Locatelli has worked out, otherwise I would have been suicidal!” he exclaims. How is it working with his wife, who is a co-owner of the restaurant – does it make things difficult sometimes? “No! To be in the kitchen is like driving a car with a limited rear view – my wife gives me clear vision. I know who is sitting where, what is happening, everything. If you are shut up in the kitchen, thinking about your dishes, you end up cooking up your arse, y’know?”

And does he think that the British are getting better at cooking food? “Oh, eee’s fantastic, much better,” he yells. Another dramatic gesticulation. “Food used to be seen as a fuel, now it is being seen as a pleasure. And, it’s so important, innit? What we eat is going to define what we are like at 70. If you eat well, you’ll have no problems with your lungs when you are older, no problems with your intestines and sometimes you might even be able to have a good fack, y’know? Food is important.”

Before he shoots back into the kitchen to start preparing lunch, he adds that, despite only doing television in the first place for the money, he has plans to do more. “There is a lot I want to say – I have things zat upset me.” And are there plans to open more Locatelli restaurants? “No, no, no, no, no!” Is that a definite no? “You see, when you open a restaurant, they say it takes five years out of your life. I’ve been involved in four openings, so I should die in five years time!” Nothing at all then? He frowns, pushes back his hair and for the first time in an hour, is silent for a moment. Actually, he says eventually, there is that project in India: he is looking into the possibility of opening two Italian restaurants, one in Bombay, one in Delhi, in conjunction with an Indian leisure business.

“The idea of going to India is exciting! I don’t want to do a restaurant in Covent Garden. You want a good challenge, don’tcha? It would be revitalising.” And Indian culture is very similar to Italian culture, isn’t it? The obsession with family and food, the shouting, the propensity for melodrama … “Yes, they are beautiful, lovely people!” he exclaims passionately. “If richness has to be measured in money and gold, then America is the richest country in the world. But if it is measured in the importance of family, tradition, love for food, then it is India!” And with that he shoots off into the kitchen, which is now emitting devastatingly divine smells. A few seconds later loud Italian shouting can be heard amid the clunking of plates and pans.