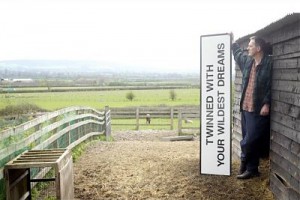 In the English countryside somewhere to the west of London, a middle-aged former pop star is jumping up and down on a children’s trampoline for the benefit of the FT photographer. Scattered around the field there are the following items: two armoured personnel carriers, an old cooker, a flock of Soay sheep (a primitive breed that apparently dates back to the Bronze Age), two dogs and a road sign inscribed with the words “Twinned with Your Wildest Dreams”.

It’s all a very surreal but apt way to introduce you to Bill Drummond, a man who has made a career out of being strange. Here are a few of the things that this 51-year-old Scot is famous for: being a guitarist in the unsuccessful but culturally significant Liverpool punk band Big in Japan; being one half of the KLF, the biggest British pop act in the world in 1991 and 1992; winding up the KLF at the height of their fame, live onstage at 1992’s Brit Awards, while spraying the audience with blank machine-gun fire; reconstituting the KLF as the K Foundation and giving a one-off award of Pounds 40,000 for the worst art of the year 1993 (it went to Rachel Whiteread, the winner of that year’s Turner Prize).

And then there’s the thing that he is most notorious for: burning Pounds 1m in a bonfire on the Scottish island of Jura. Drummond celebrated this bizarre, controversial act, which, like many of his performances, was carried out with his long-term creative partner Jimmy Cauty, by buying himself a Dollars 20,000 picture by Richard Long called “A Smell of Sulphur in the Wind”. He subsequently cut this picture into 20,000 tiny squares and took it on a touring exhibition called “How To Be An Artist”, selling each piece for Dollars 1. To date, he has sold about 4,000 bits of it.

As Drummond takes a seat in his converted garage, at the back of the detached house near Aylesbury which he shares with his partner and three young children, I pose the only question that can be posed: why? Why has he turned out like this? “What do you mean?” he responds, flashing a smile that reveals a set of battered teeth. “You ask that as if there’s something wrong with me, or something strange.” There’s nothing wrong, as such, but there’s definitely something strange going on. “Heh heh heh.” Can his antics be explained by some odd episode in his childhood? “Um, well, my father was a minister, so he had a vocation rather than a job, and that must have been a template for me. I don’t do things for money, I do them because I have to.”

In recent years these “things” have got stranger and stranger. He has set up something called the Intercontinental Twinning Association, which involves him going around the world, putting up road signs to twin towns that haven’t yet been twinned (he has, for example, twinned Belfast with “Your Wildest Dreams”). He has walked out the shape of the words “Silent Protest” across the streets of London in protest at the war in Afghanistan.

Most recently he drew a line across a map of the British Isles from Rosapenna in Ireland to Felixstowe in England and called it “The Soup Line”. He is now spending much of his time visiting homes along this line, equipped with ingredients and utensils, with the simple intention of making them a vat of soup.

It’s hard to make sense of all this and it doesn’t help that Drummond is decidedly vague if you ask him whether he sees himself as a prankster, an artist, a publicity-seeker, an art terrorist or something else entirely. “If I ever have to name my occupation for legal things I usually write ‘publisher’,” he replies unhelpfully. Registering the exasperation in my face, he considers what he has said. “But I did go to art school when I was 17, and those three years did define how I view things. In the back of my head, although I don’t like to think of myself as an artist, and I’m uncomfortable with the phrase, I suppose that’s how I approach what I do. I would prefer to say I’m someone who just does things.”

This roundabout answer is typical of Drummond: he hates explaining his work, fearing that doing so will kill the art, if that is what it is. But, at the same time, he is very keen for people to understand it. There are further contradictions: he says that he wants his work to exist outside the media, but here he is talking to the FT; he wants people to respond to his ongoing “How To Be An Artist” and “Soup Line” projects, but is petrified of success. “I have seen in my experience in pop music that the worst thing that can happen, from a creative point of view, is commercial success.”

Indeed, perhaps the most intriguing and amusing thing about Drummond is that his strange life has been marked by serial commercial success, though he has never really sought it. In the 1980s he became a successful band manager, of acts including Echo and the Bunnymen and The Teardrop Explodes, although he “didn’t have a clue” what he was doing. In the 1990s his band, the KLF, became huge, even though they were actually conceived as an “anti-band”, a small act offering a bleak commentary on the music industry. “We didn’t know the KLF were going to become this huge, internationally, commercially successful thing,” says Drummond mournfully. “We set out to be our own record company, not have management, and let the whole thing go in whatever direction. But suddenly we became pop stars. And in the end it all took its toll.”

Looking back at it now, the success really did take its toll on Drummond. His behaviour on the last day of KLF’s existence was that of a very stressed man: firing blanks into the audience at the Brit Awards, dumping a dead sheep outside the after show party (with a tag reading: “I died for ewe”). He was even, apparently, considering cutting his right hand off during KLF’s last performance. Was he having a breakdown? “I guess so, yes, ha!” he laughs, leaning back in his chair. “Not a major one – it was more of a minor mid-life crisis. I was just thinking, God, I’m nearly 40 and I’m making pop records. There are other things I want to do with my life.”

And of course one of the things he wanted to do with his life was to set fire to Pounds 1m of the cash he made from KLF’s hit records. A decade later this act still provokes huge controversy – controversy that has been fuelled by Drummond’s and Jimmy Cauty’s vow not to talk about it for 23 years. “We found that the more we talked about it, the more the focus came on us, rather than the act. All people wanted to ask was why we didn’t give the money to charity, and whether we really did it?”

Did they really do it? “Er . . . yeah,” he says, breaking his promise not to discuss it until around 2019 with surprising ease. “Of course there are days when I wake up and think, shit, why the fuck did I do that? How do you explain that to your children. Once my son came home from school and said ‘Dad, somebody in the playground said you burnt Pounds 100 – that’s not true is it?’ I remember thinking – God, I wish it was true.”

What makes the burning of the million pounds so shocking, even now, is that Drummond is evidently not a rich man: his Land Rover is battered, his home is modest, the number of children he has to support is large (as well as the three kids he lives with, there are three elsewhere by other partners). One thinks that Pounds 1m would actually come in handy. “We burnt a million quid, but we didn’t burn all the money from the KLF,” he explains. “And there have been enough things I’ve done since my 20s that have earned me money. One of them was a book I co-wrote in 1988 called The Manual (How to Have a Number One The Easy Way), which got translated into German six years ago, then got turned into a radio play and then got turned into a musical. Things like that that end up earning money without you having to think about it.”

I ask him how Sallie, his partner of 14 years, feels about his antics – not least the fact that a few years ago he took the most expensive item in the house and cut it into 20,000 little pieces. “She’s very sceptical about it,” he admits. “I think once a woman has children, what she wants, regardless of what may have made you attractive to her in the first place, is security. And the thing is, I don’t spend my time going out to bring stuff back to feed the family. I do what I want to.”

Drummond’s frankness is impressive. As is his fearlessness. Unlike most of us, it seems that when he has an idea, he just finds it impossible to resist. However, it’s hard to decide whether the quality of his work is as impressive. Parts of it certainly do say meaningful things about the transient nature of pop culture, the inanity of fame, the commodification of art. But some of it is just very silly and self-indulgent.

“But the thing is, when I started with the Justified Ancients of MuMu, the band which became the KLF, people were saying, Bill, this is just self-indulgence. But that came together . . .” There is a silence as he realises he is doing what he hates most: explaining himself. “I’m not saying, hey, what I’m doing now is going to be this commercially successful thing that comes together – it won’t be. I’m at a different time of my life, but there is a pattern. I do think that in everything that I do, I’m actually gnawing away at the same seam.”

As Drummond makes his way to the trampoline in his back garden I worry that this book doesn’t sound very promising at all. In fact, it sounds terrible. Then again, if it goes the way of Drummond’s other projects, it’ll probably end up being a bestseller. And then, once again, he’ll have that awful problem of dealing with success and money.